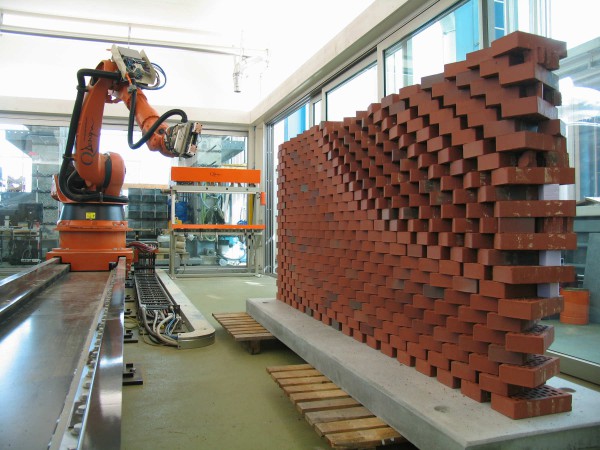 It is remarkable that technology has a significant effect on our lives, and it influences all disciplines and majors including architecture. Information technology has facilitated the work of architects and provided them with softwares and applications that saved a lot of their time and effort. Even though there is extreme influence of technology on architecture, it has the lowest productivity among other fields[1]; it was approved by the U.S. Department of Commerce and the Bureau of Labor Statistics that architecture recently has the less production than it had in the 60’s[2]. This decay backs to several reasons: 1. the wasted time in documentation and paperwork, which increased with the design’s complexity.1 2. The dependency on human hand force in the construction process.1 Moreover, 3. The poor communication between design teams and contractors.

Other industries build upon machinery also rely widely on Robots, and automotive industry is setting a good example. The main cause of this is that such industries produce mass products, and their manufacturing process depends on repetition.1 On the contrary, architectural design hangs on the uniqueness in identity and components. Even so, the concept of involving robots to construction process is becoming the prime consideration and concern of AEC firms, specially the firms that adopted BIM technology to their system. They believe that robots can advance their productivity and accelerate the design workflow. In this article, we will argue the consequences of using robots in the construction, and its effects on the BIM workflow. (Read more Via arch2o.com)